All articles tagged with "Hard Faceslapping"

Mistress Gaia routinely likes to humiliate and punish her slave so as to make him sharp and keep him on his toes. She had noticed that there was a slump in his performance so she had to do something. She took him to her torture chambers and she slapped him as hard as she could while he was naked. She also made him lick the dirty soles of her boots.

Madame Marissa had a new slave and she wanted to teach him his first lesson. She had taken time to observe him and now it was time to act. She had to let him know all the things she does not like and would not stand. She slapped him hard after blindfolding him. She made sure he was not able to tell when she would slap him and when she would not. He just felt blinding slaps rain on him.

Slave brutally humiliated by his mistress

This slave leaked his mistress' slave and did not think she would know. But she knew and she was mad. She however did not show him. She pretended not to know and waited for the opportune moment to punish him. When it came, she slapped him so hard her had was imprinted on his face. She spit into his mouth and also made him lick her sweaty and smelly feet.

Mistresses slap each other hard

These mistresses wanted to find out who had the worst and most painful slaps. Lea and her friend Lexis slapped each other repeatedly and whoever gave up had lost. The task was to see who would endure. They slapped each other several times and by the end of it, Lea won. She felt pain too but her slaps were harder and her friend could not stand them anymore so she won. 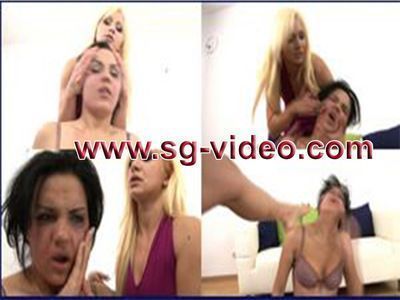 Lea Lexis and Gina had a bet and Gina won it. She was supposed to do whatever she wanted to Lea. She decided to try the slap fetish she had seen online. She made her friend lick her feet first before she rained slaps on her face. She took advantage of it and enjoyed every minute of it because she knew that when it came to her turn, her friend would not spare her. 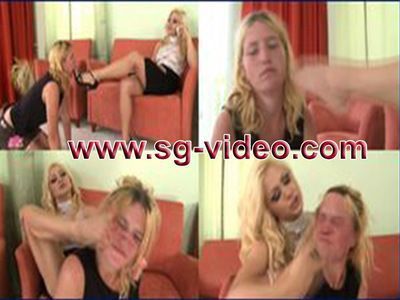 This new slave was not good at taking instructions. JJ wanted to show him that there were consequences for his actions. And the consequences for her involved slapping him. She wanted to slap some sense into him and she did it in cruel and brutal fashion. She made her slave lie down and she slapped him repeatedly. She also tied a leash on his face and continued to slap him.

Sibilla and JJ slap guy who played them

Sibilla and JJ were played by this guy and they wanted to teach him a lesson. They slapped him repeatedly and left his face all red and in pain

There is nothing that Alice loves more than teaching how to slave slap. She goes to her pupil's homes and tutors them for weeks. For the final exam, they are to dress in uniform and show her their power. She demonstrates what she expects to the helpless slave in front of her. She then watches are each of her students demonstrates what she has taught them. If they fail, they may become a slapping dummy for her next class.

Six lovely bitches, three dark haired, and 3 fair haired sluts all here for one reason and one reason only! To teach this bad slave boy a lesson! Watch these kinky babes go slap happy on this poor guy! The each take turns slapping him until his face turns red! Maybe he will think twice before he runs his mouth on either one of these lovely beauties! They use him as a human bag for their slap attacks!